As the Chinese saying goes, “All parts of the lotus are treasures (荷莲一身宝).” From its spiritual petals to its crunchy seeds and fragrant leaves, the lotus plant has been venerated for centuries in Chinese literature, religion, medicine, and food.

Yet as the second part of the saying emphasizes, “the lotus root in the autumn is the most nutritious” (秋藕最补人). Harvested starting late July in southern and central China, the lotus root (莲藕 lián’ǒu, or 藕 ǒu) is a popular autumn food and medicinal ingredient in both its raw and cooked forms. In the Ming dynasty’s Compendium of Materia Medica (《本草纲目》), it is honored as a “magic root” (灵根) that can bring joy to frequent consumers. According to The Classic of Herbal Medicine (《神农本草经》) written over 2,000 years ago, the raw ou is noted for being able to relieve heat, nourish the lungs, and strengthen the spleen.

Cooked lotus root is more often served at the dinner table. One dish in particular, lotus root with sticky rice and osmanthus (桂花糯米藕), is a quintessential snack of the Jiangnan region south of the Yangtze River. It features a spongy texture and sweet flavor from the combination of soft boiled lotus root, glutinous rice (糯米 or 江米), and the dried petals or syrup of the osmanthus flower (桂花).

Liang Shiqiu, a well-known 20th-century Chinese writer and gourmand, once said, “I can tell stories about lotus root with sticky rice for an hour.” This was an understatement, as he has filled many pages writing about the snack. In the essay “Gluttony” (《馋》), Liang recalls from his childhood, “The peddler near the school gate slices up [lotus roots] and then adds molasses and osmanthus…the light purple [slices] are really mouth-watering.” To save money for a bite, Liang and his older brother skipped breakfast. At 72, Liang wrote in his first love letter to his future wife, Chinese actress and singer Han Jingqing, “This morning, I had a slice of lotus root with sticky rice. [It was] so sweet.”

The dish is prepared by cooking ou stuffed with glutinous rice, and topped with sugar and dried osmanthus flower or osmanthus syrup. Alternatively, one can drizzle osmanthus syrup on the root slices after cooking. As Liang emphasizes in “Snack Peddlers in Beiping” (《北平的零食小贩》), old lotus root, which is harvested in late autumn and winter, is preferred for a softer and starchier texture. Likewise, the stubby seven-hole ou is preferred over the brittle and thin nine-hole variety. 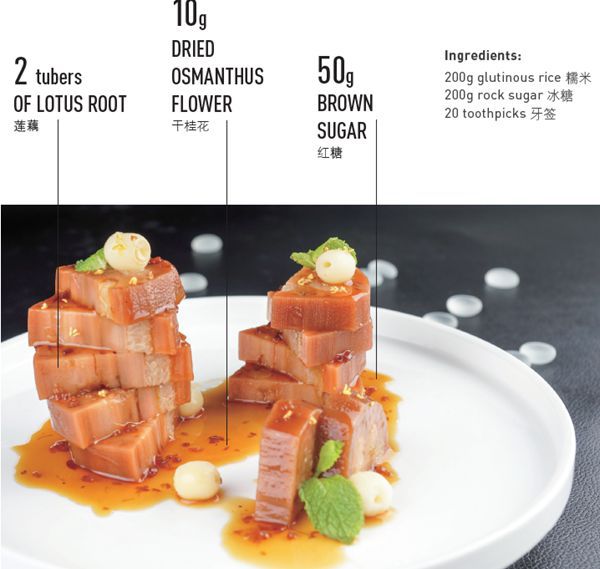 1. Soak the glutinous rice for over an hour and drip-dry

2. Pare and clean the lotus root tubers, then cut off a 2-3 cm section on one end

4. Boil the stuffed root in water over a high heat, then cook on low heat for 30 minutes

5. Add brown sugar, rock sugar, and osmanthus flowers, and add water so the root is submerged

6. Boil the root again on high heat and then stew on low heat for 2 hours

7. Remove the lotus root, and turn to high heat to boil the broth into a sauce

8. Slice the root, drizzle the sauce over the slices, and serve

“Ode to Ou” is from our issue, “Tuning Up”. To read the entire issue, become a subscriber and receive the full magazine. Alternatively, you can purchase the digital version from the iTunes Store.