The coronavirus quarantine has proved a boon for China’s frozen food sales: According to e-commerce site JD.com, online orders for frozen rice balls, or tangyuan (汤圆), more than doubled from last year, with a single factory in Shandong province claiming to have sold 500 tons between November 2019 and last Saturday’s Lantern Festival.

The traditional sticky snack, also known as yuanxiao (元宵), has been found on Chinese families’ tables for centuries. Dating back to the Song Dynasty from the city of Mingzhou (now Ningbo), glutinous rice balls are most commonly eaten during the Lantern Festival on the 15th day of the Lunar New Year, though not exclusively so. 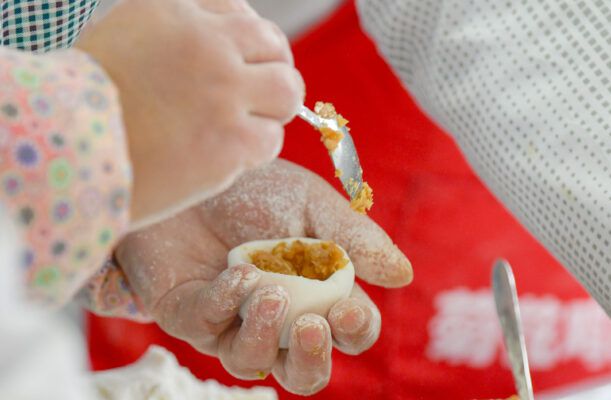 Perplexingly, different parts of China boast different rice ball features and eating habits, as shown by the saying “Tangyuan in the south, yuanxiao in the north (南汤圆，北元宵).” These two major regional rice ball types differ in more than just their name. Like dumplings, tangyuan are made by wrapping the filling with a soft batter made from glutinous rice flour and water. For yuanxiao, however, the filling is cut into small cubes and rolled in dry rice flour.

As indicated by the 汤 (soup) character in its name, tangyuan is eaten in a starchy rice soup, and has a more delicate taste. Yuanxiao is more commonly scooped out of the soup before serving, and usually has to be made fresh, as the dry flour will crack after freezing. 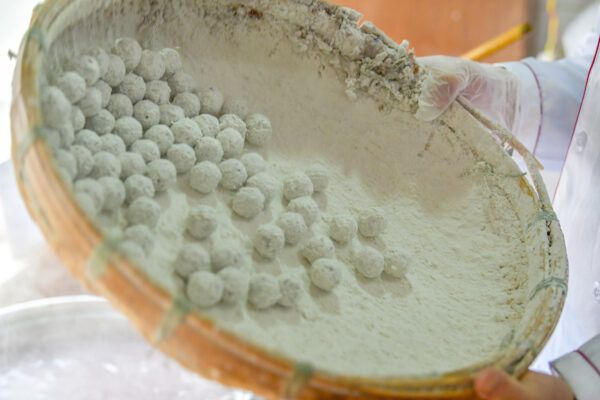 People living in the Jiangnan region are known for having a sweet tooth, and their rice ball fillings are no exception. Ningbo, the original home of tangyuan, traditionally used a black sesame filling, lard, and a small amount of white sugar as the ingredients. Ningbo black sesame tangyuan exudes a dense, sweet smell when’t it’s bitten into. According to JD.com, black sesame was this year’s top-selling rice ball flavor.

Peanut and red bean paste flavors took second and third place this year; while sweet osmanthus is another common filling. Shanghai is known for producing larger rice balls, three or four of which can fill an entire bowl, and the fillings can range from crab meat to shepherd’s purse, jujube paste, and taro. In neighboring Suzhou, tangyuan come in five colors which are not only a visual feast, but represent five traditional blessings: longevity, prosperity, good health, virtue, and natural death. 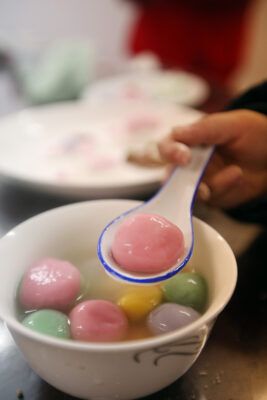 More recently, there have been even more creative spins on the snack, known as “wicked cuisines”(黑暗料理). Sichuan province, known for its spicy dishes, offers rice balls packed with chili peppers. In Chongqing’s Pengshui county, pig heart and lung tangyuan (心肺汤圆) is popular, seasoned with scallions and spicy chili. “Two pepper tangyuan” (双椒汤圆), stuffed with green and cayenne pepper, can be found in Chongqing’s well-known hot pot.

In Guizhou, chicken meat rice ball is served in a bowl of chicken soup infused with sesame paste. According to JD.com and electronics retailer Suning, salty duck egg and durian were this year’s hottest new flavors of rice balls, having both seen over 300 percent more orders compared to last year; eating tangyuan dipped in vinegar is another trend, Suning’s numbers show.

Though glutinous rice balls are associated with the south, northerners have their own take. In Inner Mongolia, an area known for its dairy products, yogurt, cheese, and a local delicacy called nai pizi (奶皮子), or boiled milk curds, are favorite local fillings. Fried rice balls are popular in the northeastern province of Jilin, and Beijingers are famous for yuanxiao filled with haw berries, lemon juice and dried osmanthus.

Still, glutinous rice balls are considered the quintessential southern holiday food. They are served not just on the Lantern Festival, but also on the lunar New Year’s Eve and Winter Solstice (when northerners would eat dumplings), on the first day of the lunar year for breakfast; and at birthday celebrations, due to a folk saying, “One gains a year after eating tangyuan (吃了汤圆大一岁).” Rice balls have great emotional value for Chinese families because the character 圆 symbolizes “family reunion” (团圆) and “completeness” (圆满). As another saying goes, “When every household makes rice balls, it’s another day of happiness and contentment (家家捣米做汤圆，知足常乐又一天).” The history of indoor heating in the PRC Unexpected car wash, a bathroom you can eat off of, Didi passenger becomes driver, 900 traffic violations, and a Kris Wu war—it’s Viral Week