Historical aids and rituals for getting a good night’s rest

Sleeplessness has become a major health concern for Chinese millennials, whose digital distractions often prevent them from their recommended seven hours of shut-eye per night (though plenty of tired workers recharge by napping during the day, even in public).

Their ancestors knew better. A proverb goes, “A full night’s sleep is better than taking ginseng (吃人参不如睡五更),” showing that sleep was historically considered important for one’s health. Many different tools and methods were developed to help the ancient Chinese catch their forty winks.

Fine wood carvings are a common feature of the shelf beds that have been in use in Chinese homes since the Shang dynasty (1600 – 1046 BCE), when the precursor of the character 床  appeared in oracle bones. However, they were not originally used for sleeping. As the Analytical Dictionary of Characters (《说文解字》), written by the linguist Xu Shen (许慎), explained during the Western Han dynasty (202 BCE – 8 CE), “Beds are used for sitting (床，安身之坐者).” At the time, beds were formally known as “mattresses (席),” a flax-woven one-person mat on which a host may sit to receive guests.

Toward the end of the Eastern Han dynasty (25 – 220 CE), beds became used for sleep. A language book from that time declared, “Beds are used for sitting and sleeping (人所坐卧曰：“床”).” A popular type of bed from the time was the ta (榻), a low couch with a handrail on either side. An end table was usually placed in the middle, so the host and guest could sit one person on each side. This type of bed is similar to the kang (炕), a heated brick bed frequently used in northeast Chinese, which come with a removable end-table where the family may sit and eat.

The legs of the ta were low, as people originally sat on the ground in their homes. From the end of the Han dynasty to the Jin dynasties (220 – 420 CE), poor families still sat on the ground, while the rich took pride in being able to sit on slightly more elevated furniture.

The ta persisted for a number of centuries, and can be found depicted in many ancient paintings such as the Night Revels of Han Xizai (《韩熙载夜宴图》), which showed officials reading scripture and playing with trinkets on the couch. Throughout history, couches were associated with literati who would play the zither, draw pictures, write poems, and play chess on the end table, or enjoy the smell of spices placed on it. 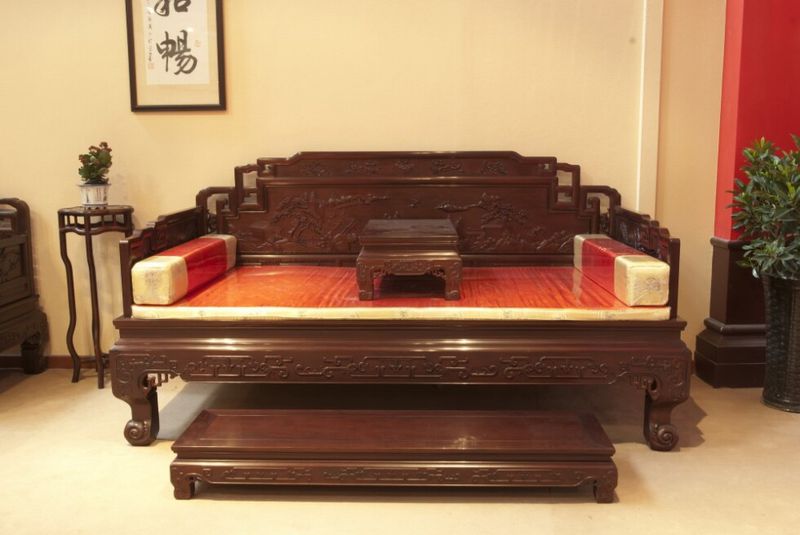 Another type of ancient bed was the “arhat bed (罗汉床),” which has one open side and three enclosed sides so that the sleeper will not easily fall out. After the arhat and the “upright stool” (垂足坐) appeared around the 10th century, beds became the furniture where the family’s most honored guests would sit, whereas the couch and mattress were for hosting less formal visitors. 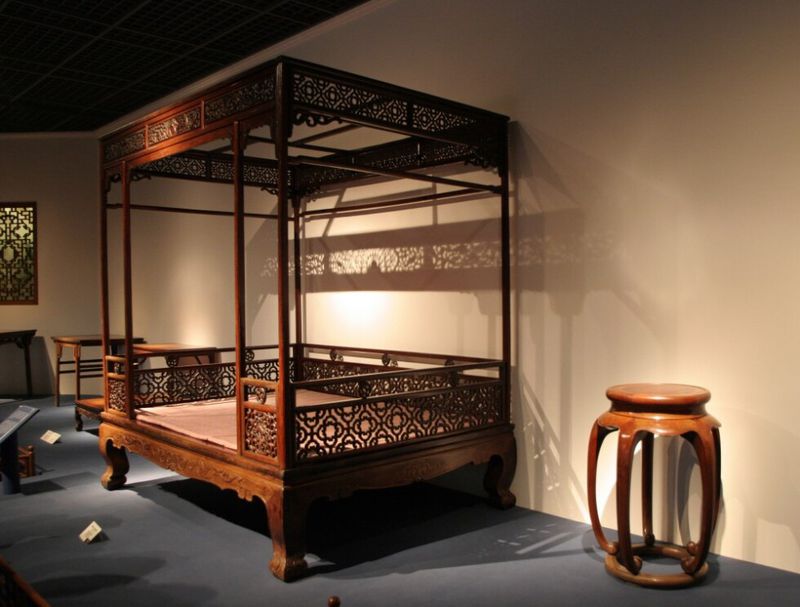 Fine wood carvings are a common feature of the shelf bed

During the Ming dynasty (1368 – 1644), the shelf bed (架子床) became common. It resembled a Western four-poster bed, with four bed supports, occasionally two or three sides enclosed by exquisitely carved wooden lattices, and a “roof” at the top. Curtains hanging from the supports repel mosquitoes during the summer and keep the sleeper warm on winter nights. In southern China, known for humid weather, the wooden framework could dispel the moisture in the air.

Lighting incense before sleeping was a fashion enjoyed by some aristocratic families, as well as the imperial palace. Not only did incense make it easier for one to fall asleep, it was also believed to have positive health effects like relieving heart conditions and stress. Good spices can also replace unsavory smells in the rooms and make one’s clothing smell nice.

The practice of lighting incense dates back all the way to the Spring and Autumn Period (770 – 446 BCE), when the Persian kingdom paid spices as tribute to the Yan state. After the introduction of Buddhism, spices were also used during meditation, which was practiced by many literati, officials and emperors.

Many different types of spices and fragrances were in vogue during various eras. During the Taizong period (626 – 649), when China traded extensively with Central Asia, many social practices and precious spices were adopted from abroad, including “spice evaluation”—where nobles would smell spices and rate them as a hobby. Agilawood (沉香) was the most popular spice at the time, followed by sandalwood (檀香). Together with the tea ceremony (茶道), lighting incense was considered the height of refinement among literati and nobles, who drove up demand for the spice trade across the Silk Road. 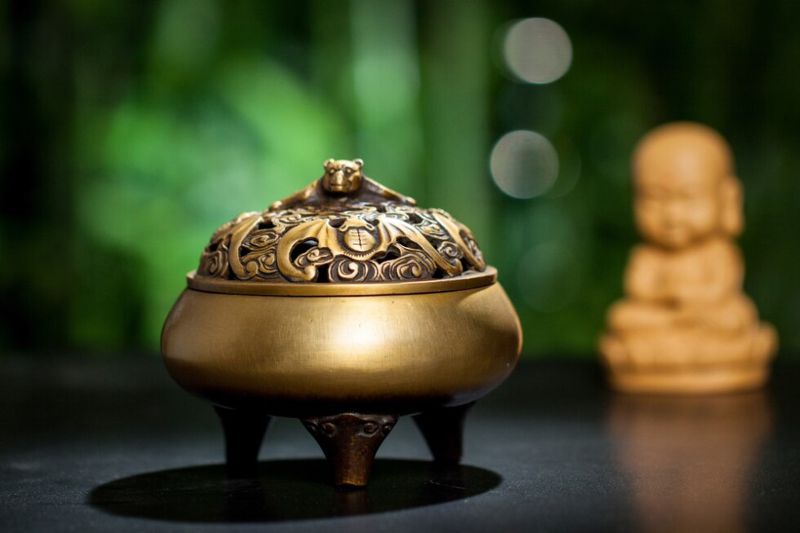 Censers were often decorated with animals or religious symbols

Incense burning led to another object becoming essential bedroom furniture: the censer (香炉). Originally used for religious activities, censers were adapted for the home with the addition of a hollow cover which preserved the incense inside the burner and circulated fragrance within the room. A prototype of this product, called the Boshan Censer (博山炉), appeared in the Han dynasty. This was a bronze incense burner shaped like a hill and decorated with carvings of birds, beasts, and three celestial hills in traditional Chinese myths.

Later, lotus-shaped censers became the most popular due to their Buddhist associations. During the Song dynasty, when craftsmanship became highly refined, finely decorated miniature censers were collected as playthings by many citizens.

Sleep aids have become more advanced and varied than ever before, with memory foam mattresses, eye masks, and “sleep-monitoring bracelets” all promising to give insomniacs a more comfortable snooze. The ceremony and exquisite workmanship of ancient sleeping rituals and tools in ancient times, though, are reminders of the high value people formerly placed on a good night’s rest—lessons that are perhaps increasingly important to learn in these hectic times.