Growing up with Lego is a relatively new experience for Chinese kids. The Danish toy brand entered China in the 1980s, and the first Lego store on the mainland, merely 20 square meters in space, was opened in 1993 in Beijing’s Yansha Mall by Lego’s then distributor, the East Asiatic Company. Due to high tariffs and low personal income, not many families could afford this expensive amusement for their kids at that time.

Fast forward to today, and Shanghai’s 800-square meter, two-floor flagship Lego store in Disney Town is always packed with young families. With its emphasis on education and developing creativity, Lego captured the hearts of parents all over China, and has cultivated devoted fans of all ages. In the first half of 2020, 46 percent of all toys sold online in China were Lego. The company operates more than 200 stores across the country, and plans to open another 80 by the end of 2021.

Lego has been releasing Chinese Spring Festival special editions in recent years. The latest releases for 2021’s Lunar New Year are two sets for children over the age of 8. “The Story of Nian” shows a cheerful crowd setting off fireworks in front of a snow-covered traditional northern Chinese residence, attempting to scare off the nian (年) monster in Chinese myth. “Spring Lantern Festival” depicts a lantern party in a southern Chinese garden. There is also a duplo set for kids above 2, “Happy Childhood Moments,” which depicts a family spanning three generations (and their pet panda) celebrating Chinese New Year in a traditional courtyard. 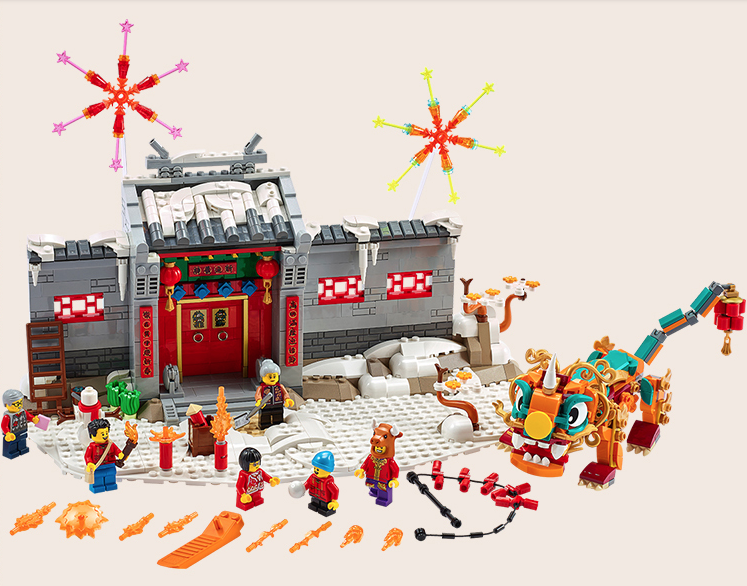 “The Story of Nian” centers around the Chinese New Year legend of the nian monster: 1,067 pieces, 699 RMB (Lego Taobao Store) 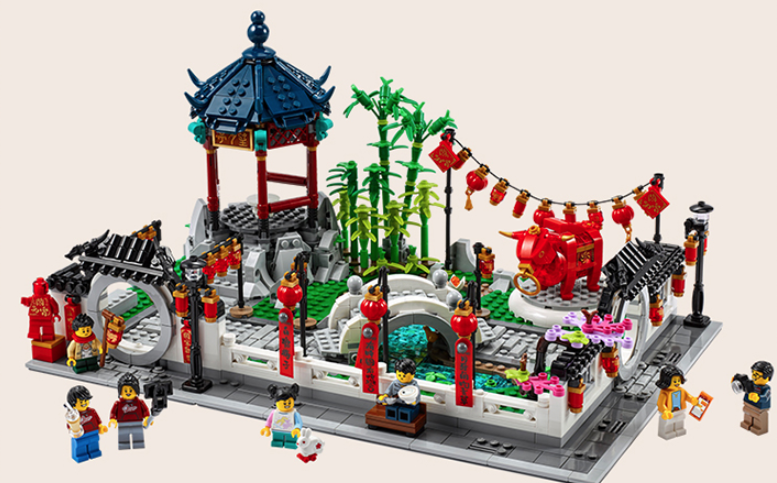 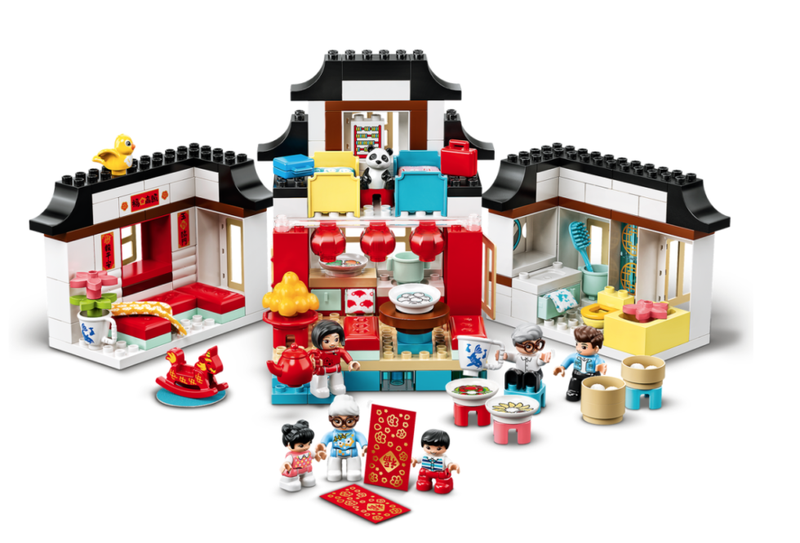 Designed for preschoolers, “Happy Childhood Moments” contains two scenes in one set: the Chinese New Year celebration and the first day of kindergarten; 227 pieces, 99.99 USD (currently only available on Lego.com)

Lego’s China theme began with “Year of the Snake” in 2013, though avid fans will remember Chinese elements in the Orient Expedition sets under the Lego Adventurers theme, released between 2003 and 2005, as well as the “Shanghai” and “Great Wall of China” sets under the Architecture theme. 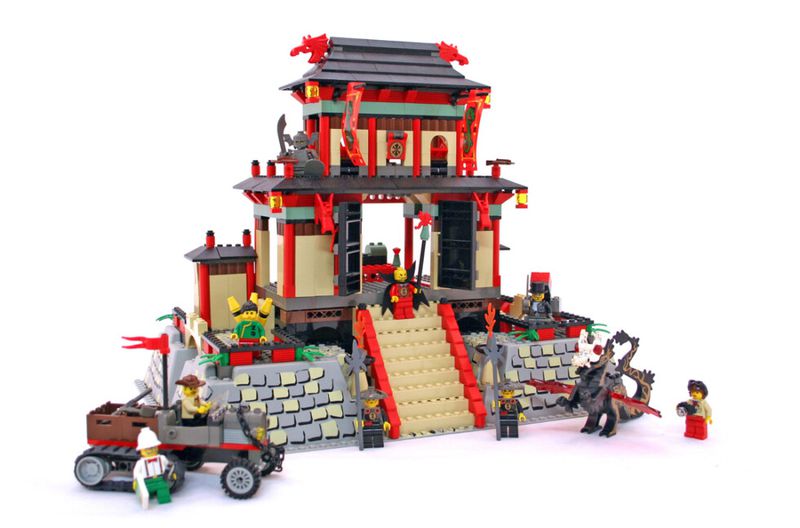 “Dragon Fortress,” released in 2003, was one out of 20 sets in the Orient Expedition series. It tells the story of a group of explorers traversing Asia to find the Golden Dragon of Marco Polo and his three treasures ©2013 LEGO Group 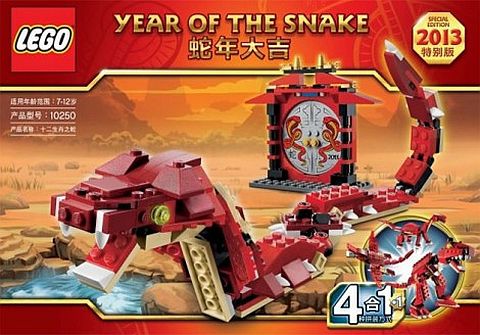 This Asia-exclusive, four-in-one set of 243 pieces, specially released for the Year of Snake, could be assembled into a red snake and a traditional Chinese gate with snake emblems ©2013 LEGO Group 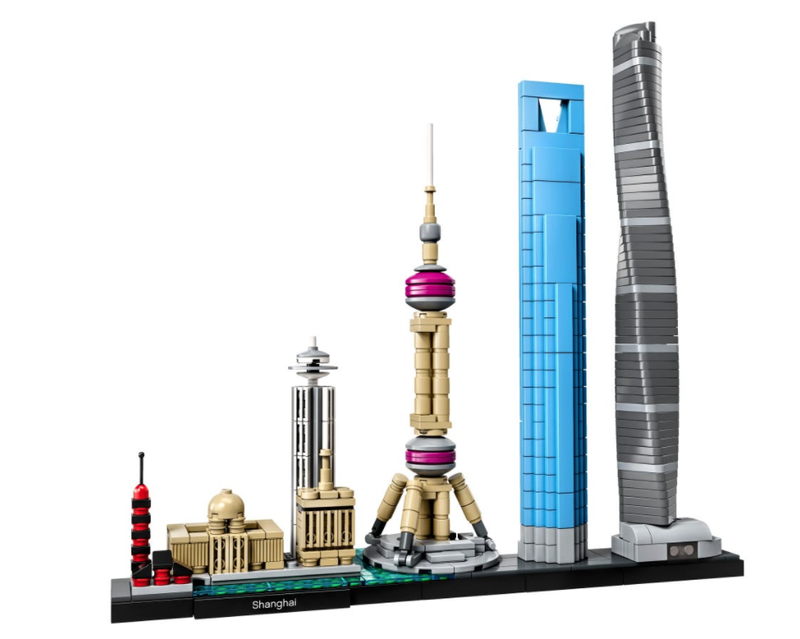 Shanghai’s iconic skyline can be recreated with “Shanghai”: 597 pieces, for children above 12 (Lego.com) 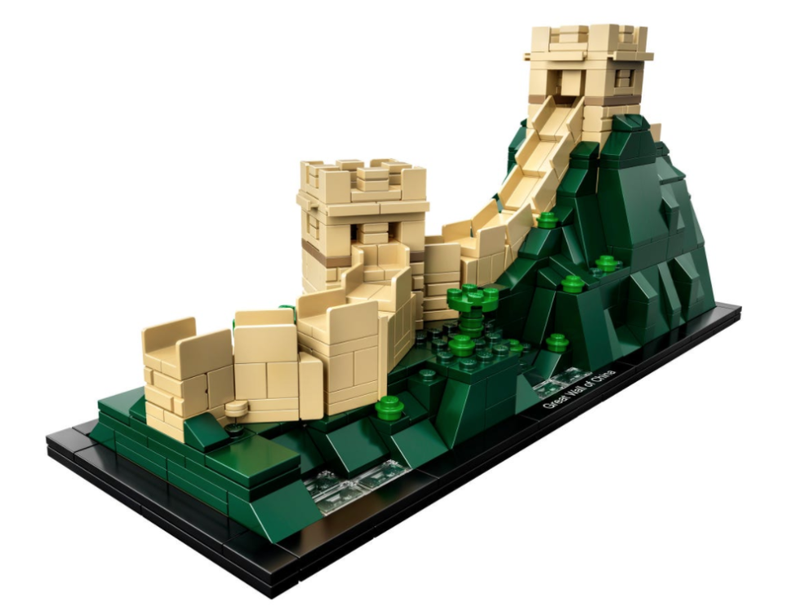 Fans can explore the architectural wonders of ancient China with “Great Wall of China”: 551 pieces, for kids above 12 (Lego.com)

Starting from 2015, the toy brand has also offered zodiac animal sets that came for free with purchase of other products during the Spring Festival season. So far, sets for the Sheep, Monkey, Rooster, Dog, Pig, Rat, and Ox have been released. 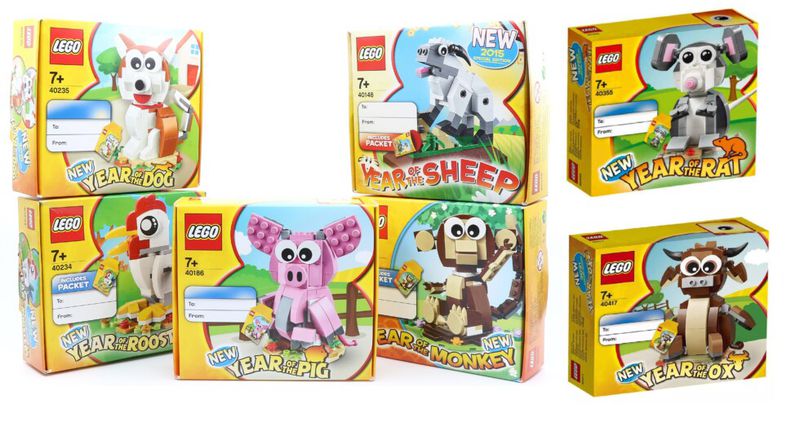 To the pleasant surprise of Lego’s Chinese fans, the company began selling other sets exploring Chinese holiday traditions for the Asian market in January 2019. “Chinese New Year Eve Dinner” shows a family feasting in their living room, with fun details like the red envelope. “Dragon Dance” depicts a troupe of four dancers holding up a Chinese dragon, led by a figure dressed in a pig costume. For its global market, Lego launched the “Dragon Dance Guy” in their Break Headz line at the same time. 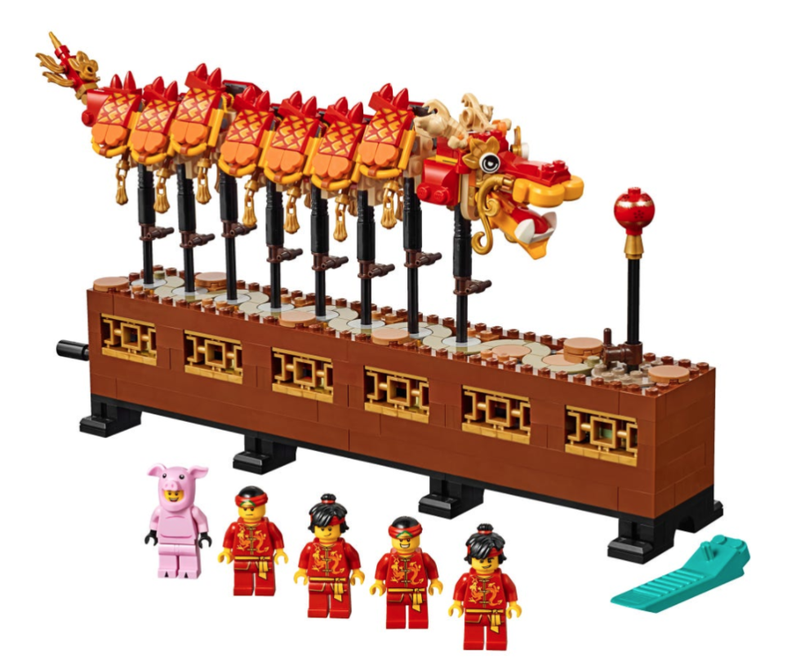 Later that year, a “Dragon Boat Race” set was released for the Dragon Boat Festival in May for Asia, and in June for the US and Europe. Two teams of rowers race in red and blue brick dragon boats to be the champion. 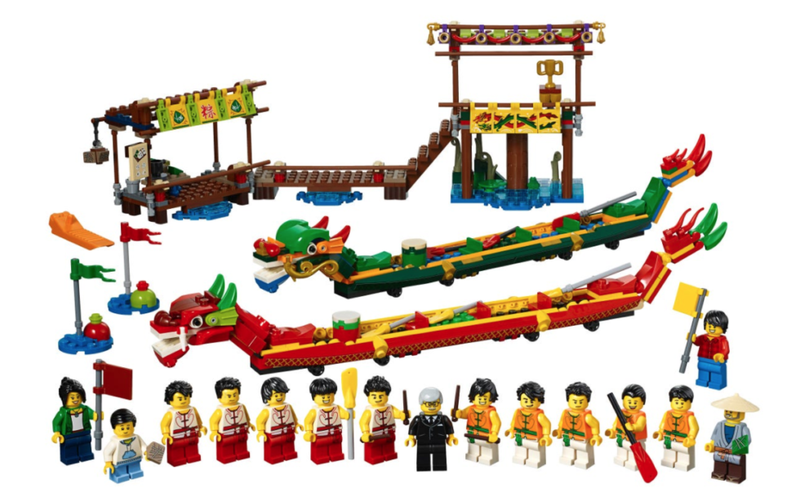 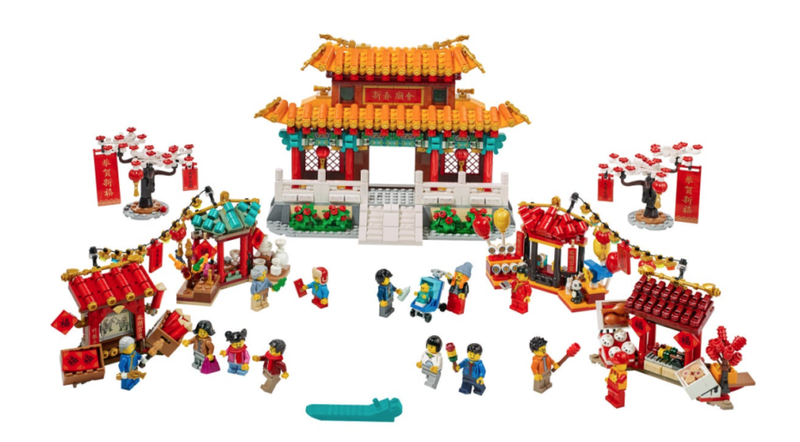 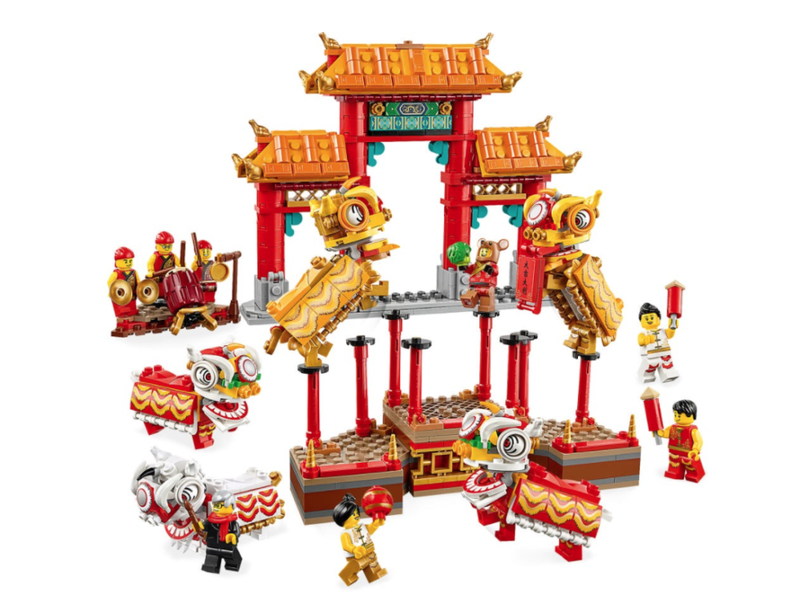 Besides the seasonal editions, 2020 saw the release of an entire theme inspired by the legend of the Monkey King and the classic novel Journey to the West. This series of 13 play sets (so far) tells the story of Monkie Kid and his friends fighting against the Demon Bull King to save the city. There are elaborate warrior robots, jets, tanks, speed boats, and even a food truck operated by Pigsy, a character inspired by the pig demon Zhu Bajie. 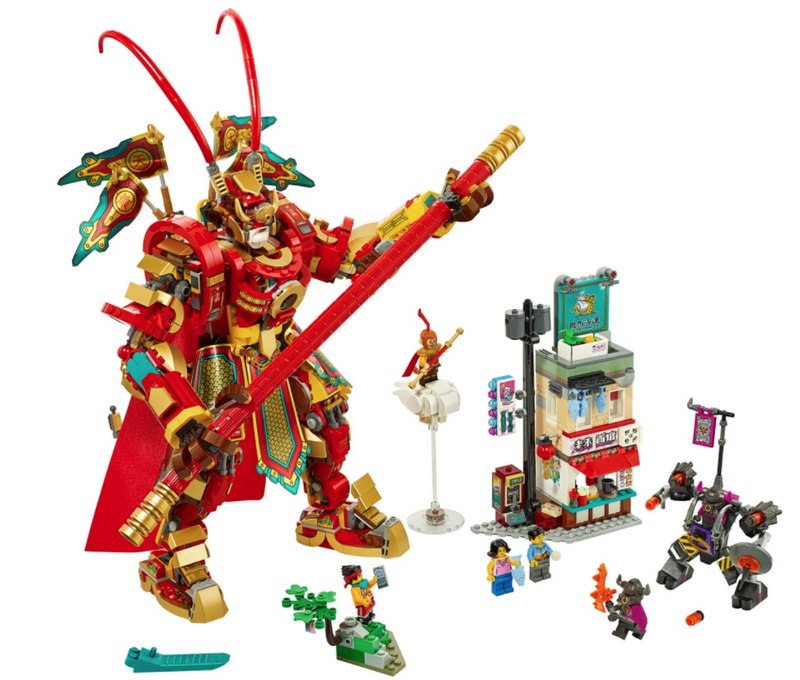 “Monkie Kid’s Team Dronecopter” is the latest release in the Monkey King series: 1,462 pieces, for kids above 10 (Lego.com)

For more Chinese inspiration, you can go to one of the flagship Lego stores in Beijing, Shanghai, or Hangzhou. Their Lego models and sculptures are changed seasonally, and are all closely connected to local history and culture. Some of the past highlights include a huge dragon crawling over a pillar, a giant panda sitting on an arched bridge over a lotus pond, and Hangzhou’s iconic Leifeng Pagoda. What are your favorite China-inspired Lego ideas? 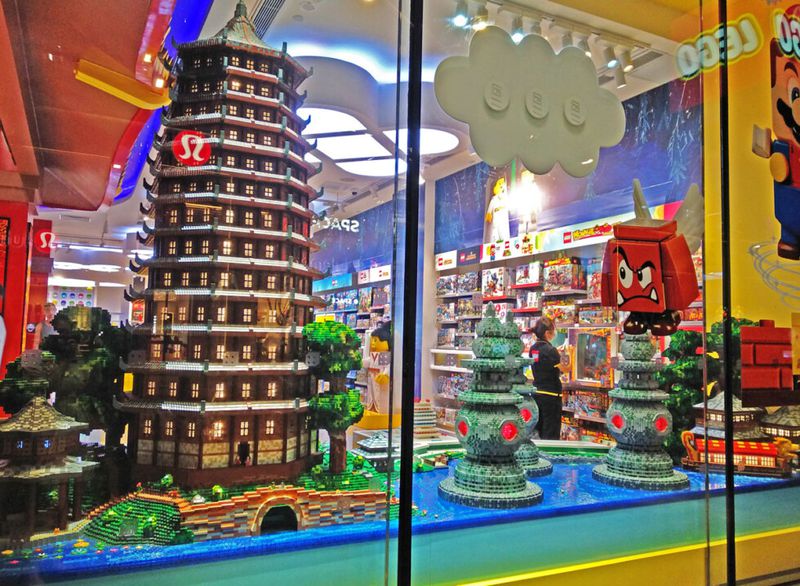 The Lego flagship store in Hangzhou opened in June, 2020, and displays sculptures inspired by local sites (Photo by Liu Jue)