Clothes might make the man, but historically in China, headgear gave a person their pomp and rank. Since at least the Spring and Autumn period (770 – 476 BCE), 冠冕制度 (guānmiǎn zhìdù), literally the “law of headdresses,” governed what each class of ancient Chinese society could wear. It was named after the two types of head-coverings reserved for nobles and emperors—what today would be generically called 帽 (mào, hat).

帽 first appeared as 冃 in seal script. The character was made up of the 冂 radical, representing an object that could be worn around the head, and two horizontal strokes that resembled the decorative frills that hung on hats in ancient history. This was later modified to 冒 (mào) as a clue to its pronunciation, and the 巾 radical was added to indicate “cloth,” which most hats were made of.

According to the Analytical Dictionary of Words by linguist Xu Shen (许慎) in the Eastern Han dynasty (25 – 220), “冃 is the headdress of soldiers and barbarians.” At the time, people of the Central Plains more commonly wore headdresses known as 冠 (guān) and 巾 (jīn), which usually did not cover the top of the head. 冠, was allegedly invented by the Yellow Emperor, the mythical ancestor of all Chinese, and reserved for adult males of the nobility (士, shì) class prior to the Qin dynasty (221 – 206 BCE). They were worn over a bun and tied at the chin with a silk ribbon.

By contrast, 巾 originally referred to a kerchief that commoners, servants, and slaves tied around their forehead or hair bun to soak up perspiration and keep hair off their face while working. During the Han dynasty (206 BCE – 220 CE), 巾 gradually became fashionable among the upper classes, who made it into elaborate shapes.

Henceforth, 冠 took on more ceremonial functions: At the age of 20, boys came of age and were bestowed a cap in a ceremony known as 冠礼 (guānlǐ, “rite of the cap”). In the Han dynasty, officials began making the 冠 taller and wider, and adding “beams” across the top to indicate the official’s rank. The rules grew more complex—and the beams taller—with each succeeding dynasty. However, children and persons of low rank were still not permitted to cover their whole head.

冃, and later 帽, began appearing in historical texts after the Northern and Southern Dynasties (420 – 589), a period when China saw significant cultural absorption from the western frontier. They typcially covered the top of the head, and were worn for everyday use by all classes. Perhaps the most famous 帽 in Chinese history was the wusha or black gauze hat (乌纱帽 wūshāmào), a close-fitting headdress with “wings” on either side. First appearing in court during the Sui dynasty (581 – 618), they became exclusive to government officials during the Ming dynasty (1368 – 1644), and synonymous with bureaucracy. 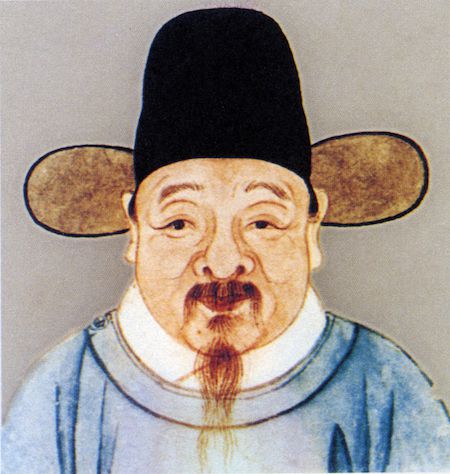 Hat fashions continue to be varied today, with different headgear serving practical as well as symbolic uses in different settings. There are 太阳帽 (tàiyángmào, sun hats) for staying out of the sun, hard 安全帽 (ānquánmào, safety hats) that workers wear to stay safe on construction sites, and headgear like 军帽 (jūnmào, military caps), 警帽 (jǐngmào, police hats), and 厨师帽 (chúshīmào, chef’s hat) to indicate the wearer’s profession or rank within an organization.

It’s not just humans who need the protection of the 帽: 笔帽 (bǐmào, pen cap) and 螺丝帽 (luósīmào, screw cap) are useful coverings that keep objects safe. Hats can also be metaphorical: to 扣帽子 (kòu màozi, “place a hat on someone”) is to assign blame or accuse a person of nefarious activities, usually falsely, as in “被扣上作弊的帽子，他的学业就这样被毁了 (Bèi kòushang zuòbì de màozi, tā de xuéyè jiù zhèyàng bèi hǔi le. His academic career was ruined by the accusation of cheating).”

One figurative hat a person does not want to wear is a green one: 被戴绿帽子 (bèi dài lǜmàozi “to have a green hat put on one”) is a euphemism for (usually men) getting cheated on by one’s romantic partner. On the other hand, “to remove a hat,” or 摘帽子 (zhāi màozi), is a positive metaphor meaning to cast off some unpleasant label—prior to China declaring victory over absolute poverty in November 2020, many counties had proudly announced they’d “doffed the cap of poverty (摘了贫困帽, zhāi le pínkùn mào),” and 摘帽 itself became a shorthand for poverty elimination.

帽 is also found in various idioms (chengyu) that trace back to the strict dress codes of ancient China. 青衣乌帽 (qīngyī-wūmào, “green shirt and black hat”), meaning “common person,” is derived from the clothes that commoners wore according to the sumptuary laws of periods after the Sui and Tang (618 – 907) dynasties. Likewise, 乌帽红裙 (wūmào-hóngqún, “black hat and red dress”) means “a man and a woman,” referring to the clothing worn by each gender.

Also relating to hats’ historical association with power, the idiom 戴高帽子 (dài gāomàozi, “to wear a high hat”) means to receive excessive flattery from someone else. 穿靴戴帽 (chuānxuē-dàimào, “put on boots and hats”) is a cheeky chengyu referring to the meaningless cliches that some writers use to pad out their works, usually at the beginning or the end. It comes from the classic 18th century novel Dream of the Red Chamber, and is often used to criticize political or religious sermons.